The Art of Modern Juggling c1904

This amazing book was written by Anglo, aka Thomas Horton. He killed his wife in Adelaide in the early 1900s and was executed for the deed.

I have downloaded a pdf copy  of the book for interested readers.
Posted by Leann at 10:51 PM No comments:

So instead of revising my PhD proposal I got caught up in writing this very rambling, incoherent account of Australian Juggling history 1860-1920. I've still got a lot of gaps to fill so this is preliminary research. Please consider it a draft and work in progress...

Juggling in Australia began as a part of circus performance, and circus arrived in Australia around 1842.  According to newspaper reports, many of the early equestrian performers had juggling as part of their act. For example, Mark St Leon in Circus the Australian Story, describes Indigenous circus man, Billy Jones, as a juggler. But Jones was also an equestrian, tightrope walker and acrobat. Juggling in Australia, was, presumably a part of other circus acts, but rarely a stand alone performance.

Juggling in the past was considered an odd, sometimes evil, occupation. Most 19th century stories of juggling in Australian newspapers were about Indian jugglers. Juggling was often identified as an occupation associated with the mystery and 'otherness', of the east. It was cast in the language of what post modernist author, Edward Said described as 'Orientalism', a political vision of reality whose structure promoted the difference between the familiar (Europe, West, "us") and the strange (the Orient, the East, "them"). (Edward Said, Orientalism) 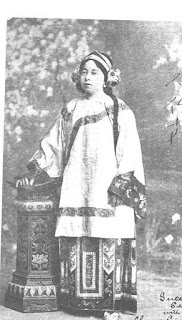 The most famous exploiter of Orientalism in the early theatre was American magician Chung Ling Soo (William Robinson) Above is his very Anglo American assistant Dot dressed as Suee  Seen.

Early jugglers, employed by circus entrepreneurs, used this pervasive ideology and narrative to promote Indian jugglers in their circuses. A little later in the 1860s, with the opening of Japan to the west, early popular theatre owners capitalised on a similar view of juggling.

An example of the circus exploitation of  orientalism, is the case of brothers Mahomet Cassim and Mahomet Abdallah. Advertised by Burton's circus as being from the court of a Rajah, their props and acrobatic performances capitalised on the exotic nature of their origins. Their subsequent execution for murder of their compatriot on the basis on little evidence, is an example of how pervasive the 'orientalist' idea of the 'evil' east, was in the 1860s.

Juggling in the late 19th and early 20th Century

Charles Waller is perhaps the only person in Australia to make a contemporaneous attempt to document juggling in Australian popular theatres in the late 19th and early 20th centuries. Waller
( and I know some jugglers will not like this) was a magician. In 1941 he attempted to list every magician who had visited Australia and describe their performance. This quickly grew to a project which included jugglers, protean artists and ventriloquists.  Waller came to Melbourne in 1895 and his accounts of performances from that date rely on personal recollections. After his death, his work was passed to Charles Wicks who in turn passed it on to Gerald Taylor who turned it into a book called Magical Nights at the Theatre. All three were magicians and members of the Australian Society of Magicians, and it is thanks to them that there are some eyewitness accounts of early jugglers in Australia.

The juggler in this troupe was named Herconuske, he performed sword balancing and brick manipulations. However, the main attraction of the troupe was top spinning . The whole performance was framed with a broken English explanation of Japanese customs, including a discussion of the quality of tea. This framing focused once again on an orientalist idea of the mystic east.

Other Japanese troupes followed through the late 1860s and early 1870s.

The late 1880s saw the arrival of Clark's all star American speciality group and its associated juggling performers. These included Japanese jugglers, and Sylvo, a balancer and juggler.  He used goblets, umbrellas and other common objects, balanced them and rearranged them in startling rapidity. Sylvo's performance clearly showed the influence of the great French performer Trewey, and introduced a European influence into the art of juggling in Australia.

Of course the most influential juggler in early 20th century Australia  was Cinquevalli. It was he who firmly established juggling as a popular theatrical art in this country. Cinquevalli made four trips to Australia and at one stage considered settling here. 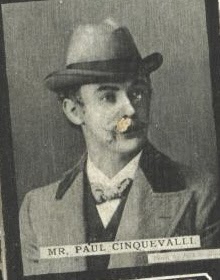 His first performance was in 1899, he dressed in traditional circus attire, silken tights, and juggled common objects.

Cinquevalli juggled salt and pepper, tea cups, tea pots and sugar. His juggling always had a clever  denouement. He would juggle the tea items and end up pouring a cup of tea, or he would juggle a knife, fork and potato and halve the potato as it fell. Of course his billiard ball trick was a long time favourite with Australian audiences.

Cinquevalli introduced an everyday flavour to the art of juggling. He once said that he hoped that an audience member, after witnessing his performance, would go home and try to juggle the kitchen utensils. Cinquevalli was a juggling evangelist, and one of the first people to introduce common object juggling to the Australian populace. ( he is also my hero) 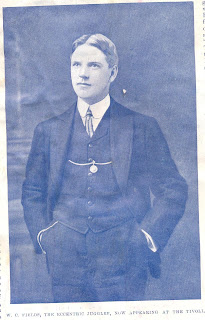 In the wake of Cinquevalli's successful and profitable appearance, juggling became a popular feature for the managers of the large variety halls such as the Tivoli and National Amphitheatre in Sydney. Australian jugglers were given more opportunities to show their skill on the stage and become regulars on the bigger circuits.  It was at this time that the Kavanagh boys( rackets and hoops)  made their first appearances at the Tivoli (1911) and the Lentons (hat jugglers) also made their first appearance.

Another form of juggling rose simultaneously, club juggling. This originated from the Indian club swinging movement of the late Victorian era. Australians were apparently very keen on this form of exercise. Famous Australian bush poet, Henry Lawson, was an exponent, and the world champion of the sport was also Australian. The national obsession with sport and competition undoubtedly influenced the popularity of club swinging and perhaps the sporting aspect also influenced some of the early club jugglers in Australia. 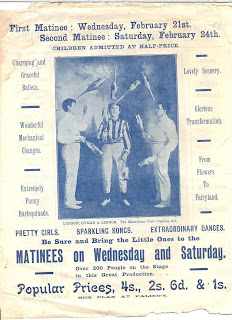 One of the first Australian club juggling acts was Lennon, Hyman and Lennon who appeared in the Sinbad the Sailor pantomime in 1906.  After a long career as jugglers, the Lennons became theatre entrepreneurs in Adelaide. Ted Lennon established one of Adelaide's first cinemas, and his showings of silent movies were interspersed with vaudeville acts, which presumably would have included some club juggling. 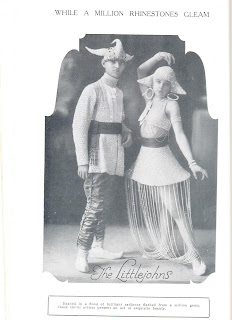 In the 1920s one of the most famous club juggling acts was the Littlejohns, who juggled patented 'diamond studded' clubs and were well known in the famous variety halls. They also toured independently in regional areas and their itinerant shows brought juggling to a wider audience.

With the advent of the talkies, juggling, as with other vaudeville and circus arts, fell into decline. But it was a large part of the Australian popular theatrical experience for a very  long time and of course continues to be enjoyed by many (strange, odd, eccentric and mathematical) people today.

And if you're interested in present day practitioners of this strange hobby you might like to look at Sydney Juggling
Posted by Leann at 12:19 AM 2 comments: