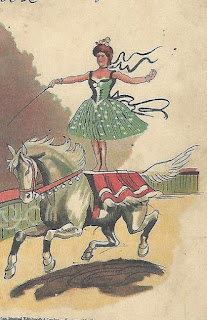 Circus and Juggling seems to be a natural association, and so it proved in early 19th Century Australia. Whilst the main attraction of early circus was equestrian feats, juggling was included as another, less important, feature. The Australian circus began in Tasmania in 1847, and by the 1850s several different circuses had evolved. The gold rush which started in 1851 led to further demands for entertainment and a consequent increase in circus activity.

One of the early exponents of circus in Australia was James Ashton and juggling played an important role in his show from the very beginning. In fact, as early as 1849, in Melbourne, he had a benefit which featured Monsieur Risley, a juggler. By 1852, Ashton was in New South Wales and promising juggling, balancing and acrobatic feats for the entertainment of people in Singleton, a country town.

Ashton seems to have also performed Risley juggling, that is juggling people with the feet. This type of juggling was named after Richard Risley Carlisle who introduced it in the USA in the early 1840s. However, this was not the same Risley who performed with Ashton in Melbourne in 1849. Ashton also seems to have juggled other items with his feet, this is known as ‘foot juggling’. There is some evidence that Ashton popularised foot juggling in Australia, as one of his apprentices, Robert Taylor, was well known for this skill.

Taylor, born in Windsor New South Wales, was foot juggling in Sydney by 1855, firstly with Ashton and later with Burton’s Circus. An early picture of juggling published in the newspapers, showed Mr R Taylor upside down laying on his back, with a large ball balanced on his foot. Taylor is dressed in a one-piece frilled body suit which resembled the costume of a clown. His lower legs are encased in decorated stockings and his feet covered by flat pointed shoes with bows. In 1857, Taylor performed at the goldfields at Bendigo with Burton’s circus. In this performance he put a large ball ‘through a variety of evolutions moving it with the same facility with his feet as if they were his hands.’ He also stilt walked and balanced on a large ball whilst juggling.

Ashton was not the only circus proprietor at this time, in Sydney his circus had a rival, Malcolm’s Royal Australian Amphitheatre. At Malcolm’s they had a house juggler called Signor Cardoza, called the juggling king, who performed a ‘grand juggling act on a courser’, a horse.

Another competitor who arrived around 1852 was Henry Burton.  On Boxing Day that year he introduced his Grand Fete at the Sir Joseph Banks Hotel at Botany Bay Sydney. It featured his great equestrian artistes, including Major John Downey, who juggled whilst his horse galloped at full speed, and an equilibrist who, on the back of a white horse, spun plates and manipulated other items.
It seems therefore that object manipulation was a major part of the circus tradition, although only a tangential part of the show. Juggling complemented feats of equestrian acrobatics, probably played a role with the clowns and tumblers and was in the skill set of most circus performers.

The discovery of gold in Australia changed everything for entertainers in the country. It brought wealth, thousands of people, and a multicultural mix to the small insular society. This resulted in a higher demand for shows, and many circuses responded by becoming itinerant and visiting the gold fields, chasing the money of those who were chasing their dream.

With this desire for more entertainment came a requirement for more performers. One way the circus met the demand was by adopting or acquiring unwanted Aboriginal children.   One of these was a young indigenous boy, nicknamed ‘little nugget’. In 1852 the young boy was juggling with Burton’s circus near the gold fields at the Commercial Hotel Bathurst. He performed as one of the jugglers of Antwerp, ‘spinning plates and throwing balls’.

The young man was ‘adopted’ or kidnapped, as many young Aboriginal children were, and trained in circus as an added, exotic attraction Later he was renamed ‘Billy Jones’ after John Jones, a former Burton employee who left to form his own circus and took Billy with him. Billy Jones was the first  documented Aboriginal person to perform in a circus, he was an acrobat, juggler, equestrian and superb performer.

By the 1860s circus had become a featured entertainment in Australia and juggling was part of the show. These early jugglers were some of the first to introduce juggling to large Australian audiences and from them comes a large part of the Australian juggling tradition.


- A lot of the background information for this article, particularly about 'Billy Jones',  comes from Dr Mark St Leon's superb book, Circus The Australian Story

If you are interested in present day juggling try Sydney Juggling
Posted by Leann at 8:38 PM No comments:

Houdini's Tour of Australia and the First Merry Widow


Just look for
The First Merry Widow
and
Houdini's Tour of Australia
on Amazon...


Even cooler! Both are now available in paperback through 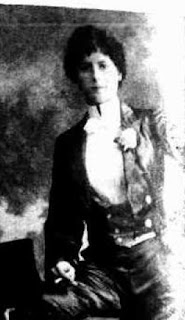