In the early 20th Century, Cinquevalli popularized juggling in Australia and due to this, Harry Rickards, the owner of the Tivoli circuit, looked for other jugglers to entertain his audiences.

At the time of his arrival, Fields was 23 years old. The local version of Theatre Magazine described him as 'A comparatively good looking , fair coloured youngster. ...a good revolver shot and a capital horseman.'

Fields began his tour in Melbourne in June, traveled to Adelaide for about a week in July and then had a two month stint at the Tivoli in Sydney.

His act was most notable for its comedy.

Fields dressed as a tramp, said little and let his antics and dumb show provide the laughs. 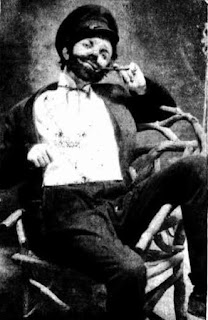 For a ten minute turn in Adelaide, he used a battered old  grey belltopper (hat) and twisted it around his feet, hands and head. He then placed a cigar on the hat, placed both on his toe and whipped them up so that the hat fell onto his head and the cigar into his mouth.

He followed this with feats of three ball juggling. (He used tennis balls)  The Adelaide Advertiser said that 'under his control the balls were made to bound from place to place with lightning speed.'

In Sydney and Melbourne, Fields did the  billiard ball trick. Apparently this involved the use of a trick pool table. Field would bounce balls off parts of his body and they would rebound into the pockets. This trick was very well received by audiences.

The juggler was very popular in Sydney in particular.The Referee newspaper described the encore demands from the audience on his opening night as 'unreasonable.' Most reviews commented on his humour. The same newspaper said 'he does the most difficult feats with a drollness which is irresistibly funny.'

Fields returned to Australia in 1914 for another tour. Of course he followed up his juggling career with star turns as a comedian in the Ziegfeld follies and in movies. Field gave up juggling, partly because he wanted to drink, and partly because he wanted a more rewarding occupation. Nonetheless, he did gain his initial fame through juggling and was one of the most successful acts on the Tivoli circuit in Australia in 1903.

If you are interested in contemporary juggling in Australia try Sydney Juggling.

The description of his act in Adelaide comes from The Adelaide Advertiser, 13/07/1903

The description of the billiard ball trick is based upon a description found at www.juggling.org

Finally, quotations about his performance in Sydney come from The Referee, 29/03/1903