Fanny Powers of the Tivoli

Fanny Powers was a popular child performer at the Tivoli Theatre in the late 19th and early 20th Centuries.

She was born in 1890 near Leichhardt in Sydney to Maria and George Powers. Her parents must have been involved in the theatre because she was performing by the time she was 7.


Here she is as a child. 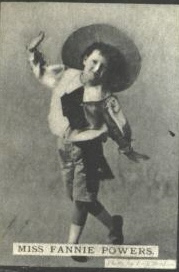 Fanny was an accomplished mimic and dancer and was well known for imitating the great stars who visited Australia. She was also very popular with Harry Rickards and his family, which included two daughters.

In 1903 Rickards took her to England where she replaced Vesta Tilley at the Oxford Music Hall. She was too young to be paid because of child labour laws, so was given a 'present' every pay day.

Fanny was a popular favourite in Australia until 1912 when she gave up the stage to get married. An enormous benefit was performed for her farewell, and she never returned to the boards. 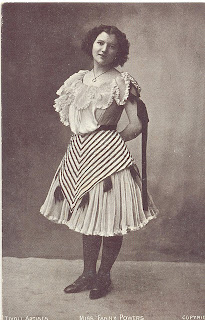 Above is Fanny as a young adult.

She married Mr William Foote, a South Australian businessman in 1913. He owned several racehorses and was some years older than Fanny.

The pair settled for a time in Manly NSW. During the early 1920s they lived in a beautiful sea side house with their three children, George, Arthur and Nancy.

In the mid 20s they moved to Adelaide.

William died aged 63 in 1937, and Fanny died the next year, around June 1938. There was little fanfare when she died but she was fondly remembered for decades as one of the fixtures of the Tivoli Circuit.
Posted by Leann at 3:44 PM