I signed up for Google plus 1 today, so if anybody is interested , email or add me to your account.

I have not updated for some time due to work committments. I am working on adding some photos and information to the blog and website soon.

Thanks to all who are buying the ebooks- your support is appreciated. 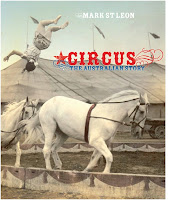 Mark St Leon, Australia's premier circus historian is releasing a new book through Melbourne Books which will be available in May.

Mark has studied Australian Circus for many years and this book will be the definitive history of Circus in Australia.

Anybody who has had the privilege of listening to Mark speak about circus will know that he has an encyclopedic knowledge of the subject, he is the expert in this field. I'm happy that the book will include the stories of May Wirth and Con Coleano, which will make it an unforgettable reading experience. If you are interested in circus, you will love it.

Anyway, it will cost 39.99 and will be in a soft cover large format.More information at Melbourne Books at www.melbournebooks.com.au

A couple of weeks ago I posted a postcard of Little Cliff. Amazingly, a relative emailed me with details of his life.

And here is part of John Perry's email.

The postcard on your HAT posting of 27th February is, indeed, the English 'wonder' performer Little Cliff.

He was 14 years of age when he toured the Rickards theatres in Sydney, Melbourne and various parts of NZ in the second half of 1906. I imagine the source you found giving his age as 4 years old had dropped off the first '1'!

Little Cliff (proper name Clifford Perry) rebranded himself as Laddie Cliff the following year, when he started touring the United States. He went on to become a big star of vaudeville in US and UK in the 1920s and '30s.

He was my late father's first cousin. The family ostracised him for both going on the stage, and divorcing his first wife; both were shameful acts in those days! He died in 1937 without issue.


I also found the autograph below in my collection.

Many thanks to John for contacting me and for allowing me to reprint part of his email.
Posted by Leann at 5:28 PM 1 comment:

The NSW Postcard Collectors Society fair is a source of many unusual and interesting theatre postcards.

For example, this lovely image of Ethel Haydon, a Victorian born singer/actress who married George Robey the famous English comedian after she started a career with George Edwardes in London.

I'm not sure, but I think this is the 'Little Cliff' who thrilled Tivoli audiences in 1906. However, he does seem a bit older than the advertised 4 years old.

This is Andrew Mack, the Irish American comedian/singer, who toured Australia in 1905. He liked it so much he returned in 1907.
But the most interesting find at the postcard fair today was this.

It's a handmade card dated 1917. The picture in the middle is a newspaper cutting.


The inscription says, "A Tribute in memory of your debut from The Knuts. 1917." The back of the card looks like this.

The handwriting says," From your stage assistant." The print identifies the card as being a souvenir from the , " National Committee of YMCAs on active service with the Australian Imperial Forces."


So is it a wartime joke? or a souvenir of a performance? It certainly is interesting.

Jack Ricketts, (Scenic Designer) saved the picture below which shows him and a fellow designer painting the act drop of the Criterion Theatre in 1901 for a Josephine Stanton production.

This sketch shows the painting frame of the late Criterion Theatre and depicts the writer and William Diamond of New Zealand at work on the scenery for the opening of the Josephine Stanton Company. This drawing, which was presented to the writer by the artist will give readers of this article an idea of the work room of the professional scenic painter.

The picture above was drawn by C Gordon Stanhope.

More HAT at the ibookstore

I have released two more short books at the ibookstore. Both are about the stars of the early Australian stage. One book deals with performers in the Royal Comic Opera Company during the late 19th and early 20th centuries.

Details here
Posted by Leann at 8:58 PM No comments:

Gertrude Concannon was a Queensland born soprano who toured the world to great acclaim.


She was born in Maryborough in 1899, to Tim and Annie Concannon. The family was quite musical. Gertrude sang, and her two sisters, Josephine and Eileen played the piano and violin respectively.

In the early 20s Gertrude was very popular in Queensland. Her voice was described as having 'crystaline clarity.'


Around 1924 she started studying with Madame Christian in Sydney, a year later she was on her way to the United States to work with the Doree Opera Company.

She stayed away from Australia for 13 years and sang in the United States, London, Egypt, and India.

In 1943 she married John Degnian a man she had known from her Maryborough childhood. The couple married at St Mary's Cathedral in Sydney.

Gertrude continued her career as a singer, composer and teacher of singing in Australia until her death in 1978.

She was a great and talented Queenslander...

If you are able, please help some other great and talented Queenslanders by donating to the Queensland Premier's Flood Appeal . These floods are a terrible disaster for the people of Queensland.
Posted by Leann at 3:46 PM 1 comment:

I have updated HAT-History of Australian Theatre website with 300 new names on the database, several new pictures of old performers and an article about Celia Ghiloni.

Remember, HAT books are now available at the ibookstore. Look under my name- Leann Richards. More books will be published in the next two weeks.

In other news Gae Anderson has published a fantastic book about Tivoli founder Harry Rickards. The book is available through her website. A very good read.

And here is Harry Rickards, the English originator of Australia's very famous Tivoli circuit. A generous and ambitious man who rose from English Music Hall performer to millionaire theatrical entrepreneur. 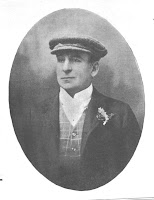 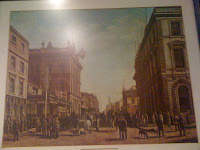 Last year, I purchased a box of memorabilia which originated with Jack Ricketts, a scenic designer. In the box were many letters some of them were from...Alfred Tischbauer.

Tischbauer, known as 'Tish ' to his friends was a French born artist who was involved in the Paris Commune. According to legend he was deported to New Caledonia and from there came to Australia He was born around 1854 and arrived in Melbourne in 1879.

He began his career as a teacher and fine artist in Sydney, but by the late 1880s was working for theatrical manager Alfred Dampier as a scenic designer.

The Frenchman was not only an artist , he was also a romantic chap. In Melbourne he had an affair with his boss's maid. The poor girl fell madly in love with the exotic artist, and when he didn't return her feelings, she committed suicide. During the subsequent enquiry, Dampier and his family stuck by Tish .

The good relationship between Tish and Dampier didn't last, and in 1893 Dampier declared himself bankrupt and amongst his creditors was Alfred Tischbauer who was owed 591 pounds in salary.

Tischbauer never got over Dampier's betrayal.He worked for a while in Australia as a teacher and then departed for America with his wife in 1903. He worked as a designer for some American managers but didn't enjoy the work.

In 1909 he wrote the above letter to Jack Ricketts.

"I learnt the death of our dear friend A D ( Dampier) as I receive newspapers from Sydney pretty regularly. So that now the chances to recover some of my poor earnings are gone for ever."

It seems that Tish had a long memory and held a grudge. In his other letters he seems educated, articulate, somewhat depressed but always generous.

Tish's wife returned to Australia in 1922 and she was described as his widow. It is assumed that Tish died in the US shortly before her return.