Victorian born William Anderson was a gambler, a risk taker and an adventurer. He was also one of Australia's most well known managers/theatre owners in the early 20th Century.

Bill was lucky enough to marry the beautiful and talented Eugenie Duggan (above), who was the leading lady of the Holloway company when they married.

Above are Bill and Eugenie on the cover of a programme. Eugenie soon became the leading lady of Bill's company.
Bill toured a circus around Australia, he built the Kings Theatre in Melbourne and he produced play after play after play after pantomime. But perhaps Bill's biggest folly was Wonderland City in Tamarama near Sydney 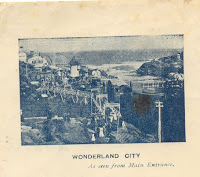 Bill spent 15000 pounds on Wonderland, it had a circus, a helter skelter, rides, amusement halls and other entertainments. At times it had its own vaudeville performances. It also had wowser neighbours who complained about the noise and the obstruction of the beach.

With all these enterprises, it was perhaps inevitable that the freewheeling Bill would get into financial difficulties. After 4 years Wonderland was closed, his productions became scarce and Bill's life became a bit less flamboyant 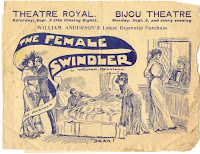 Above is an advertisement for one of Bill's productions which took place at the height of his fame.

Bill believed in Australian performers and plays and always supported the local product. He died in 1940, much loved and much missed.