Often I purchase or receive boxes full of memorabilia. Most of it is theatre related, but often it contains material which is fascinating as general history.

The pictures from the last post came from a box of memorabilia I bought about a year ago from descendants of Jack Ricketts, a scenic designer. Obviously a lot of the material relates to scenic design and Jack's life in the theatre, however, there is also much that is related to general life in the late 19th early 20th centuries.

Here is a small sample of that material.

Firstly, a very old union card from the Shipwrights provident union. It is made out to Mr James Nicholson, member number 268 and is dated, 16th March 1876. The caption under the coat of arms says, united we stand, divided we fall
. 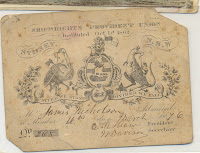 Next is a postcard/letter from Ballarat. It is dated 27th April 1915. The top right hand corner of the postcard has been torn off, to either reuse or save the stamp. As it was war time, I guess stamps were at a premium.

Below is a picure of Prince Albert's statue at Hyde Park in Sydney. I'm not sure of the date, but there is a very fetching cart standing in front of the statue. The picture is quite yellow and faint with age.

Finally, a postcard of the US ship Louisiana.I am unsure of the date, but it could be related to the visit of the American fleet in 1908.

I hope you enjoyed looking at these wonderful items. If you wish to reuse or redistribute them, please credit HAT and me...

Leann
Posted by Leann at 6:30 PM No comments:

Updating the website takes hours, so I thought I would post some pictures tthat I haven't had the time to put on HAT onto here.

Firstly, we have some pictures from the Xmas card that Mr and Mrs Jack Fanning of the Tivoli Theatre in Adelaide sent to their friends in 1917.

Here are Mr and Mrs Fanning;

and here is the Tivoli Theatre in Adelaide. 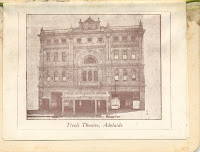 This is an old advertising card for a play called A Woman of Pleasure., a melodrama. THe caption says ' The troopship on fire! The last boat!" It looks like an English production. probably early 20th century.

The next picture is a Talma photo of an old performer. probably early 20th century, possibly earlier. Talma was the most famous photographic studio in Sydney and Melbourne. They took most of the theatrical promotional pictures. They also produced postcards by the thousands. Talma postcards are worth far more than ordinary postcards of the Edwardian period.

This lovely gentleman is, I think, Mr Harry Gribbin. It looks like he was a comedian.

I hope you enjoyed a brief look at my theatrical pix. They will be posted to the HAT website when I get the time...whenever that will be....

Added some pages about William Anderson and corrected some mistakes on the Winifred Atwell page.

Also added a link to this blog on the front page.

Being a lazy human being I can barely manage to walk a couple of kilometres some days, but our theatricals in the 19th and early 20th centuries were people of adventure and travellers extraordinaire.

Take for example, Jack Ricketts. Jack was born in Orange NSW in 1864 and was apprenticed to an illuminator and painter in Sydney when he was 16. His apprencticeship was over after 3 years and then he was left to fend for himself as a painter, scenic designer and illuminator.

Jack painted back cloths, wings and scenery for various theatre companies.He wasn't employed by the larger entrepreneurs and so had to travel with smaller companies to earn money. Often he combined his painting duties with minor acting roles. His diary of 1899 tells the story of an amazing man who travelled far and wide to make a living.

He began the year in New Zealand with the Alfred Woods/ Maud Williamson dramatic company.On 2nd January they were in Greymouth, then they travelled to Nelson two weeks later,and arrived in Blenheim on the 19th. He worked in Wellington on the weekend of the 21st and proceeded to Wanganui the next Tuesday 24th.They spent February in Napier and Hastings and then returned to Wellington on the 25th. After that, Jack left the Woods company to pursue a project back at Greymouth with the Opera House Company.

The people of the Greymouth Opera House Company were generous and gave him a 15 pound bonus after he finished the job. Jack bought new boots, a new coat and a new hat with the money. He also gave some to his mum.

In June he took ship back to Sydney and painted a drop cloth for Mr Ward's skating Rink.

That job finished in August and Jack once again hit the road and ended up in Brisbane, back working for the Alfred Woods Company. He stayed with them as they travelled around Queensland, finally leaving the irregular paying manager in October, when they reached Toowoomba.

1900 was equally as strenuous, but I will spare you the details. Suffice to say that Jack was willing to travel far and wide to get an irregular wage. He was an artisan with no respect and no income except that which was grudgingly given by stingy managers. His livelihood depended on his skill as an artist and his skill as a negotiator. It was a hard life and Jack had no time to start a family until much later when he found steady employment with the unreliable but loyal William Anderson at Wonderland City.

There are a few really good theatre history websites but these are the homes of some of Australia's greatest theatre historians. ( myself not included.) As I am based in Sydney, these are basically Sydney sources.

Stage Whispers magazine- Current and past theatrical information- www.stagewhispers.com.au
Posted by Leann at 9:06 PM No comments:

Email ThisBlogThis!Share to TwitterShare to FacebookShare to Pinterest
Labels: links

What to do with Theatrical memorabilia.

Australian Theatrical history is studied by a limited number of people in Australia. Some of them are also collectors. Not many items of memorabilia are worth anything to people outside this limited few. Therefore, unless your item is from a very famous name, such as Nellie Melba or Harry Houdini, it is unlikely that the item will pay your mortgage or fund your retirement.

So what to do with that precious or not so precious heirloom from Great great grandmother Iris who was on the stage?

Other State Libraries probably have a similar service.

Secondly you can try Ebay or another on line or off line auction service.

Or you can contact a theatre historian, like me. Remember I am not a professional valuer, but I will try and give you an honest opinion. But usually I will recommend going to the State Library for a valuation.

So before you throw out grannie's or grandie's old theatrical store, have a good look. You might find an unusual letter from Houdini or an old autograph of W C Fields. (Yes he did come to Australia) Most importantly, please remember that the old programme or postcard may not be worth a lot financially, but it is a part of our nation's cultural heritage and should be placed in safe hands, not thrown in the scrap heap.